My interest in this project began with a general curiosity about the relationship between distance and epistolarity. While cataloging, I had the opportunity to read a wide variety of epistolary novels, including those in which the characters were writing across divides of cultural and physical geography, age, gender, and class background. Epistolary novels have a complicated relationship with distance; they at once rail against distance, seeking to shrink or even ignore it, and at the same time exist as the necessary gifts of distance. Letter exchange in epistolary novels would not exist without distance, and is indebted to its presence as an omnipresent conflict and source of motion.

The central research of this project focuses on how epistolary novels ignore, honor, or attempt to collapse distance. I define this distance as geographical, emotional, or even spiritual. I seek to contrast and quantitate, when or if possible, the various types of distances in a novel as the author conceived of them with the distances as I could actually map through various digital tools that use a standard Mercator projection. I use a corpus of literature that eventually organized itself around a particular subtype of my original genre, one both oddly specific and widely published in the 18th century. Faux epistolary travel fiction emerged in the 18th century as a way for Europeans to read about the adventures of primarily non white travelers–except those travelers were actually white British writers impersonating people of color. What I find so interesting, even alarming, about the faux travel fiction trend in particular is that it creates and then purports to collapse a fictional distance from the dominant culture that the writer does not actually have to negotiate in the first place. For example, in Letters from a Moor at London to his friend at Tunis, the “Moor”, actually an English author, supposedly travels a great distance to see the wonders of London. He finds it so amenable even to his foreign tastes that the distance magically disappears and he fits right in, celebrating his surroundings instead of dealing with the cultural distance and change  his author never actually knew. There is, notably, no paratext, no explanation, and perhaps more tellingly, no background provided in the text on who this person is–he is just a Moor through whom the British can see their own nation. As a traveller he is far from conquistador-esque, simply allowing observations to flow through him.

I used the intentionally blunt tool of mapping out the locations I note in the novels, and then noticing which details fall off the page. I was particularly interested in any potential correlations between those distances that defy my attempts at modelling, and those I’d noticed in my initial close reading to be somehow viscerally off; in Letters from a Moor, the character says he’s sitting 2 miles away in Tunis, but I as the reader am pretty sure he’s got a bit more privilege lifting him farther away than that. There is always a certain degree of falsehood or maybe wishful thinking inherent in letter writing; it is easier to lie when far away about what the environment looks like (or maybe who one actually is, too.) Rather than ignoring discord, I preferred to make this problem of distortion and incompleteness the center of this project.

Before I began mapping, I did a series of close readings, primarily focusing on the paratexts each novel contained, if any. The details I gleaned from these readings served as the basis for my examination of which details the maps did evade. Examining paratexts provided me with the opportunity to determine to what extent the authors and publishers of epistolary novels acknowledged the fictive nature of their publications. The answer to this question could be visualized as a broad spectrum of fictionality. The Moor, as I’ve noted, includes no paratext. I found quite a different approach in Chinese letters. Being a philosophical, historical, and critical correspondence between a Chinese traveller at Paris, and his countrymen in China, Muscovy, Persia and Japan. This novel included a lengthy introduction that almost served as an apology and justification for the publisher’s decision to engineer a semblance of a Chinese traveler’s experience. As written in the introduction: “If it be not thought extraordinary that in certain Pieces even the Dead are sometimes introduced as Speakers, can there be any harm in supposing certain Chinese, in fictitious letters, to be perhaps a little more learned than they are in Reality?” (Argens, xv). I found this a humorous, if still alarming, echo of another book in my corpus, Friendship in death: in twenty letters from the dead to the living: To which are added, Letters moral and entertaining, in prose and verse: in three parts. I included this latter work mostly as a satirical extension ad absurdum of my original corpus, as the distance the epistolary novel attempts to bridge is no less than that between this world and the next.

After completing close readings, I used the Stanford Name Entity Recognizer tool to identify locations in the novels I’d selected. I then edited the lists it created, and transferred them into spreadsheets. From these spreadsheets, I created in Google My Maps a map of each of the novels, with their geographical references displayed on a standard Mercator projection map, and used Google Fusion Tables as a further tool for exploration. I include below in the next section an image of the result for Chinese Letters. Magenta circles indicate places to and from which letters were supposedly sent, while yellow lines indicate the paths the letters traveled. Blue stars mark places referenced within the letters sent.

From these first maps, I gleaned several important results. First, the NER and Google My Maps alike struggled to correctly display certain place names. I found this to be for two main reasons. First, the place names might have been entirely mythical. Second, some of the place names are exotified or anglicised beyond recognition by modern mapping and location software. Both of these challenges indicate that the place names referenced in faux epistolary travel novels exist along a spectrum of fictionality, some very real and some quite unreal, and that that spectrum of fictionality is mediated by the increasing exotification and misnaming of locations  in the global south and in Asia, particularly outside the Middle East. 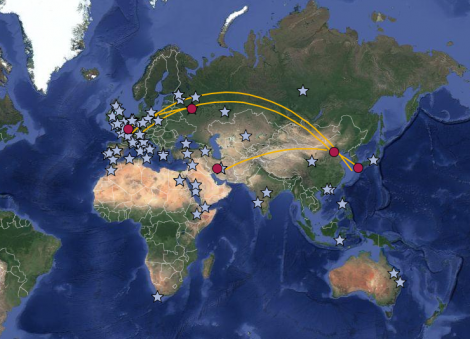 I also noticed that the clusters of stars, as place names referenced in the novels,  became much more concentrated in Western Europe and to a lesser extent in the Middle East, roughly in the area surrounding the birthplaces of the major Abrahamic religions. Initially, I hypothesized that the saturation of stars around these places simply indicated that more individual places in those areas were mentioned many times, and this would have seemingly lined up with the previous finding that far off places were lesser known and therefore more sparsely and incorrectly mentioned. However, upon additional inspection of the data, I realized that the places in which the stars were tightly packed were mentioned with more specificity, as well as higher frequency for each individual descriptive term. For example, references to anywhere in the African continent were limited to “Ethiopia”, “Africa”, and the “Cape of Good Hope”, all very general words. By contrast, within Britain alone “Devon”, “Devonshire”, “Canton”, “London”, as well as the more general “England” were all mentioned, resulting in greater specificity, and “England” was also mentioned many times, indicating high frequency. The actual geographical distance as described on a map between the writer and his subject, rather than that indicated in the novel, was much lower in England as indicated by the degree of specificity, frequency, and realness (lack of fictionality) in the places present in my data.

To better visualize saturation and specificity, I created through Google Fusion tables the heat map below. Warm colors indicate a saturated area of blue stars, with the red areas dominating in both specificity and frequency. 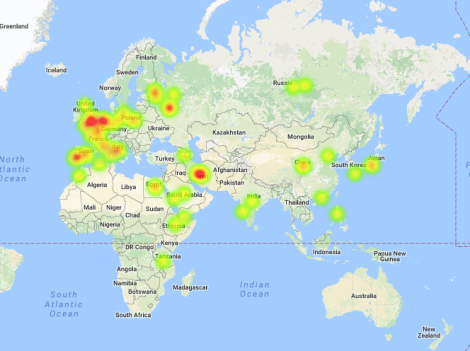 The use of maps and mapping software to explore this project, I found, was both fittingly imprecise and revealing both practically and  metaphorically. I found throughout these novels that the letter writer, like the map maker, delineates and deletes the world presented to the reader.  The correspondence between the two cultures, exchanged cordially through the written word, would seem to create a balanced view of the world. At the same time, in order to project life onto the page in the form of a letter, the letter writer must flatten it in some way, just as the reality of the earth’s shape must be flattened into a projection of a map.

In “The Rise of Fictionality”, Gallagher uses the term “honest fiction.” I suspect that the truth claims of epistolary novels that do not include apologetic paratext are guilty of certain forms of deception that might challenge their place as “honest fiction” (338). First, as explored in my existing project, the letter obviously presents the opportunity to distort a realistic relation of one character’s surroundings to another character within the novel. Were I to explore this project further, I would like to challenge the idea of the epistolary novel as a literary work of print that draws a good deal of its appeal and impact from its resemblance, often physical and tangible in the case of simulated manuscript, stamps, or postage, to the everyday, nonfictional works of print that are letters, letters never actually exchanged during the world travels of a fictional tourist.

Argens, marquis d’. Chinese letters. Being a philosophical, historical, and critical correspondence between a Chinese traveller at Paris, and his countrymen in China, Muscovy, Persia and Japan. London, printed for D. Browne… and R. Hett… 1741.

Letters from a Moor at London to his friend at Tunis. Containing an account of his journey through England, with observations on the laws, customs, religion, and manner of the English nation. London, printed for J. Batley [and others]. 1736. 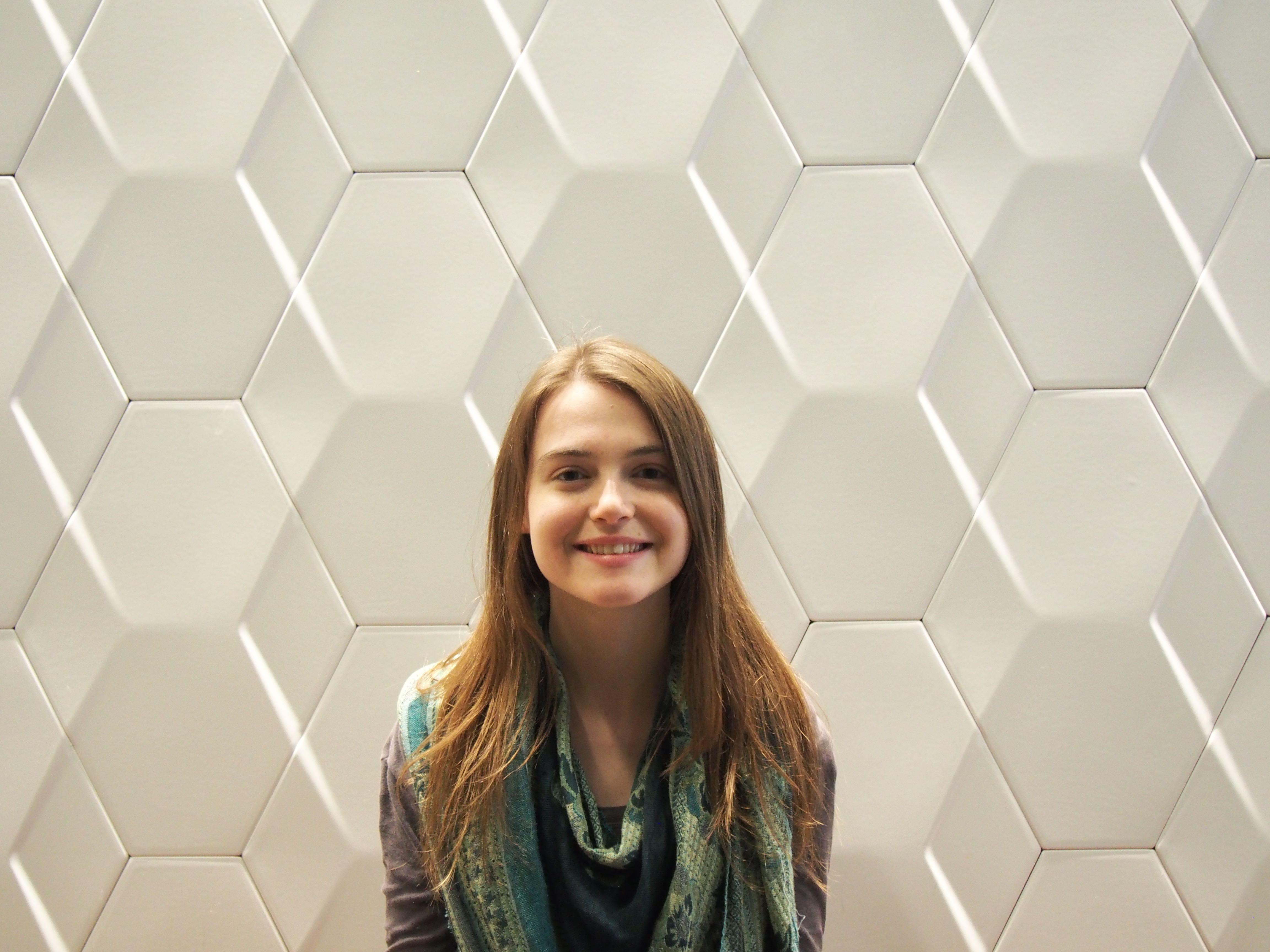 Caroline McArdle is a junior English and Philosophy major at Williams College. This summer, she has particularly enjoyed learning about 18th century travel narratives and evolving notions of fictionality. At Williams, Caroline is a teaching assistant for the philosophy department and an active participant in all things theatre and Shakespeare. She is excited to study literature abroad next year at the University of Oxford.