COCO (Characters of Color Organized) — the prototype is a data-set and collection of close readings of characters of color in 18th Century novels. It is currently in its conceptual and prototypical phase.

The novel is a form of narrative fiction that is both a rhetorical reflection and a projection of experiences (Hulme 156). Specifically, the 18th century novel is a work of fiction that aims to communicate perceived truths. That is, it was often produced with the intent to emulate a sense of verisimilitude, influenced by the belief “that truth can be discovered by the individual through his senses” (Watt 12). The novel became a vector that transmitted content interwoven with both fact and fiction to the reader (Hulme 156-157). Unhindered by its fictive nature, it played an important role in the what Europeans believed (about people of color).

How does COCO work?

At the moment, COCO lives on a Google spreadsheet with hyperlinked Google docs. On the spreadsheet “racialized moments,” instances in which characters of color are either the main topic of conversations or participants in a scene that demonstrates clear racial dynamics at play. These moments are broken down and are categorized into metadata. For instance, the ethnicity/nationality, power position, status of freedom, and more are recorded in controlled terms with some bibliographic information. Notably, characters and “entities” (a collective group of characters of color that are not discussed in individual terms) are the foundational unit of the metadata. Each of these logged moments have a corresponding close reading that provide a breakdown of the different racial dynamics present in the “moment” or “scene” and its context within the narrative of the text.

The text(s) were parsed and mimed for interactions and moments that involve characters of color. Defoe’s Robinson Crusoe was used as the main sample text.

Keyword searching was used to assist in the search for important and interesting scenes. Specifically, racialized terms like “savages, negro, Indian,…” were used to pinpoint these scenes. However, simply searching keywords proved to be tedious, especially when working with the entirety of the work via Project Gutenberg.

As a result, Voyant, “a web based reading and analysis environment for digital texts,” was used to refine the search for “racialized moments.” In addition to incorporating the use of this distant reading tool, a change in approach was made as well. Instead of working with the entire text at a time, the work was analyzed chapter by chapter. For instance, individual chapters of Robinson Crusoe were uploaded to Voyant. Voyant has multiple helpful features that help highlight the words with the highest frequencies in a work. For example, Voyant generates a word cloud that indicates which words were most frequently used in the uploaded text with the size of the word in the cloud being indicative of their frequency. If the name of a character of color was present in the word cloud it could be inferred that a significant number of scenes that center them could be found in that section of the text. Additionally, the frequency of the most used words is also communicated through numeric values. Voyant also allows for the user to see how each use of the word appears in the context of the text. Using Voyant and analyzing the novel chapter by chapter proved to be more effective than the simple keyword searching method. 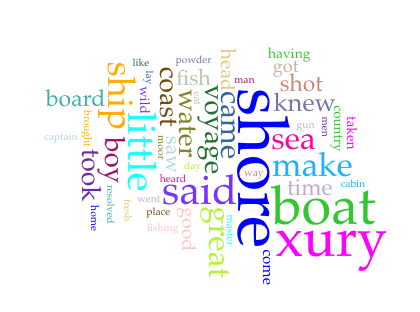 AntConc facilitated the comparison of Robinson Crusoe to other 18th century literature. Therefore, AntConc, “a freeware corpus analysis toolkit for concordancing and text analysis,” was employed to refine my search and analysis. Similar to Voyant, AntConc allows one to see the frequency of the words used and the context of their usage. However, AntConc’s display of this information is more concise and condensed. Additionally, it provides concordance plots, visual representations of the frequency of a word within a text. 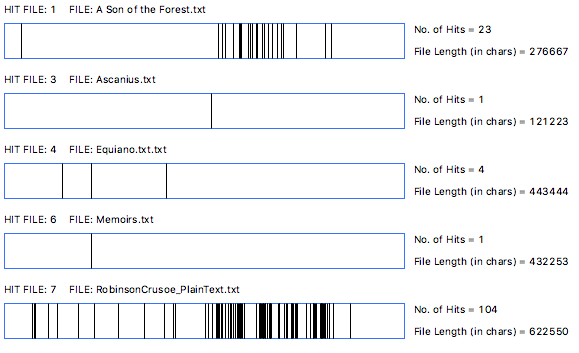 Concordance plot for the word savage

Although, using both Voyant and AntConc assisted in the targeting of moments to analyze, there were still limitations when trying to use them to facilitate close readings. Specifically, using these tools to find “racialized moments” requires relying on the appearances of search terms. However, a word is a limited marker of representation for a character. A word or a term can be used as a quantifiable unit to trace a character or a group of characters’ presences in a work. That is, these tools were created to help with distant reading and as a result one can overlook essential moments in the plot when using them. A character is more than their name or representative term. It is possible that a key moment about a character can go undetected when only using key terms, in combination with specifically targeting sections of the text where their term/name is high in frequency. As a result, the process of finding key moments in the story arcs of characters of color needed to be supplemented with plot summaries.

Implications and the Future

Moving forward the plan is to expand COCO. This expansion would not only include adding more texts into the corpus, but also searching for more features in the text. For example, it is not only important to search for the presence of characters of color but their absence as well. Are there moments in which white adventurers are in “foreign” lands but make no mention of the people who live there? If characters of color are mentioned are they discussed in individual terms or are they lumped in a large group and treated like background scenery? At the core, COCO is a project that aims to recognize how fiction can be used to present perceived truths and communicate the important influence that these depictions can have when claiming to depict under represented people.

Hulme, Peter, and Tim Youngs. “Africa / The Congo: The Politics of Darkness.” The Cambridge Companion to Travel Writing. Cambridge: Cambridge UP, 2013. 156-73. Print. 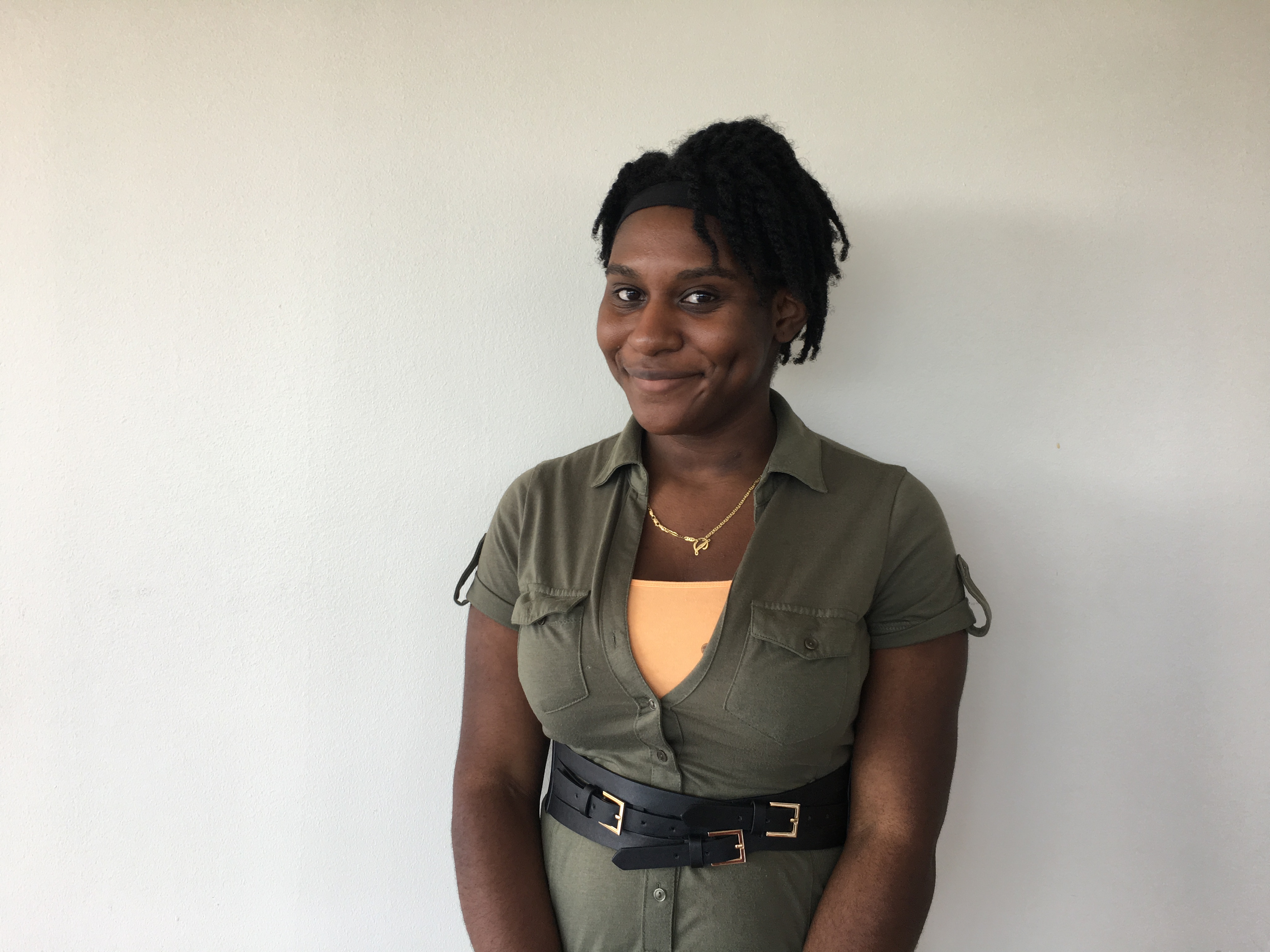 Kelsey Desir is a rising senior English major and Africana Studies minor at the University of Pennsylvania. As an END student researcher, she examines the presence and depiction of characters of color in 18th century literature. She also spends an exceptional amount of time watching reality television—for social research purposes of course.