Paging through _The Adventures of Peregrine Pickle__, one discovers a wealth of offset, italicized lines that at first glance appear to be poetry.  END’s current practice for recording these lines is to catalog them in something called a 592 field, subfield “c”.  Non-prose form: Poems.  If a cataloger is feeling very ambitious, she can even throw in an “x” subfield, which allows her to provide additional description: “attributed to Dryden,” perhaps, or, “poems appearing on pages 19, 72 in vol. II.”  Good.

However, these offset lines resist current cataloging standards in many ways.  Not all of the offset lines that appear are actually poetry.  Some are introduced by the novels they appear in as “songs,” but because of their visual similarities to verse, in being set off from the text, are often recorded as poetry.  Similarly, rhyming epigrams make it into the category, while their prose cousins are frequently omitted from records.  The classification also leaves little room for attribution information.  Consider that a few lines from Horace might appear in a text in any of the following ways: offset from the text, and attributed to Horace; offset from the text, and attributed to “the Poet”; or offset from the text and attributed fantastically to one of the novel’s own characters.  The record cannot capture these differing strategies merely by noting the presence of “Poems.”  In the case of Horace, there is the additional question of language - the lines might appear in English, but Latin is also a possibility.

If it were only a question of understanding poetry’s iterations within eighteenth century novels, the question of how to catalog “Poems” might be tangential to the concerns of END.  But since END is concerned with how books index themselves, as well as how we index books, the “Poetry” question has crucial resonance for the project.  Quotations by nature are outward-pointing - they provide information about a contemporary canon.  With what works were prominent writers familiar?  What references did a writer expect his or her readers to know?  They also reveal a concern, or lack of concern, with attribution. The Adventures of Peregrine Pickle_,_ for example, scrupulously documents the sources of its poems and epigrams, while some contemporary novels do not.  Can investigating the characters who ventriloquize established poets shed insight on the cultural status of those poets?  Is the eighteenth century consciousness of plagiarism different from our own?  Are, for example, more widely published authors more careful about the attribution of others’ material?

To answer these questions about canon and attribution, one needs more than one or two books.  One needs a web of books, so that sources begin to reappear; authors’ individual quoting practices become standard; genres of quoted material solidify.  In order to understand how the excerpted material works, in short, one needs more than perfunctory data - but which data?

Here the subjectivity of cataloging comes into play. There must be a middle ground between END’s current practice of recording a text’s “Poems,” and a complete transcription of a text’s offset lines. However, this middle ground will necessarily be a product of human decision - a highly subjective choice about which information to capture. Each cataloger must make a complicated set of decisions: whether to flip through every page of a text to look for offset lines; whether the text considers an excerpt to be a poem, a song, an epigram, or something else; whether the text attributes the excerpt to an author; whether an unattributed excerpt might nevertheless be recognizable and, if so, whether to document its source.

Of course, END could, and probably will eventually, standardize its practice for dealing with offset lines, and put guidelines in place for describing the form and attribution of excerpts. This approach will relieve catalogers of having to decide on a case by case basis which information is important. While this will also be a subjective solution - any standardization of cataloging practices is the product of group discussion and consensus - it will establish a controlled vocabulary for considering the importance of offset lines.  This change will also ensure that future catalogers pay attention to excerpted material in new, more focused ways.

Since we’re discovering that it is difficult to predict what pieces of information may become important with the introduction of a new book or a new perspective, a new cataloging standard for offset lines is likely to be initially imperfect. However, this is to some extent the case for all of our controlled cataloging practices. Each cataloger already makes daily decisions about how best to represent a book while complying with END’s standards. The poetry problem simply dramatizes the ongoing challenge of balance that confronts END: how to create a set of rules at once rigid enough to allow the creation of a usable database, while also fluid and human-generated enough to ensure that the information in that database is as nuanced as possible. For this reason, even after END has standardized the descriptive language for excerpted material, catalogers to come will, and should, continue to reckon with its relevance and representation in their own subjective and impermanent ways. 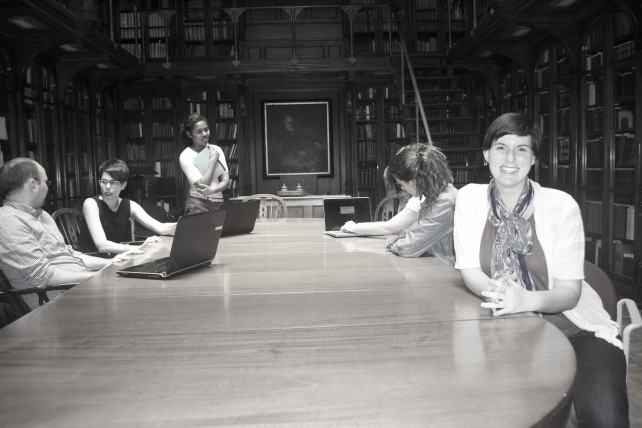 Jocelyn Hawley is a junior at Swarthmore College, where she is an English major with a Creative Writing concentration and an Art History minor. This summer, she has been cataloging books with END and paying special attention to quoted material, like epigraphs, epigrams, and verse. This coming year will find her in Madrid, pursuing her art historical interests in Spain’s museums and churches, though her poetry notebook will never be far from hand.