When perusing the pages of “Fifty Shades of Grey” or the latest Franzen novel, you don’t expect to find footnotes. As an undergraduate, I tend to associate footnotes and endnotes with academic articles and Chicago Manual of Style citations, or the more leisurely nonfiction read.

What, then, are footnotes doing buried in the pages of eighteenth century novels?

As it turns out, a plethora of things. Footnotes are describing the novel or volumes they come from by directing readers to earlier page numbers and documenting where “textual omissions” occur; they are providing definitions and translations of pieces of the text; they are attributing content to other authors and poets and citing where that content came from. Footnotes, I’ve found, are the hyper-paratext, describing the work they exist in, works of the period, and the period itself. Regardless of their specific function, they represent moments in the text where the author has felt the need to direct readers’ attention to something, and therefore offer potentially valuable information about how the author is imagining pieces of his or her own work.

Here’s a list and some links to the types of footnotes I’ve come across so far and how I see them functioning. Because these categories are self-generated, they have evolved as I’ve catalogued and encountered different types of footnotes:

Indexical footnotes: Found more commonly in epistolary novels, the indexical footnote directs readers to earlier letters or page numbers within a work of fiction. The first and most exciting example of indexical footnoting I happened across was in the 1742 edition of “Pamela.” Because this edition of “Pamela” was released after much of the controversy over the content of the book – and included an additional two volumes – the footnotes seem like they could be Richardson’s way of “backing up” events that unfold later in the novel.

Footnotes that define or translate:These footnotes provide definitions to words that appear in the text, or else offer translations of text that appears in a language other than English.

Footnotes that extend the fictionality of the work (fictional footnotes): These operate to expand upon or elaborate on the story within the novel. Footnotes that reference other works (referential footnotes): Point readers to another work or author to back up a claim or statement in the text. Not to be confused with attributional footnotes, which point readers to another work or author whose work has been directly incorporated into the novel. (This is a distinction that I’ve just begun to make with my cataloging.) Attributional footnotes are typically found after verse or poetry appears in the text. Both attributional and referential footnotes can – and do – cite material other than novels.

Footnotes that point to the world external to the novel: These footnotes elaborate on people , places, and things that exist beyond the novel itself.

Footnotes that provide authorial commentary: These footnotes read as an author directly commenting upon the story or addressing the reader.

Even with a handful of controlled terms, these rich sources of paratext often frustrate a systematic and sensical ordering system. Should an attributional or referential footnote also be categorized under footnotes that point to the external world? Should footnotes that indicate the inclusion, omission, or ordering of letters be listed as extending the fictional work of the novel as well?

The resistance footnotes have to cataloging is perhaps best demonstrated by the problem I had with organizing them initially into the two categories I thought most valuable: footnotes that point to the world external to the novel and footnotes that extend the fictionality of the work.Many early novels are obsessed with the concept of truth; claims to “fact”, “truth”, and the “actual” litter the title pages and prefaces of works I’ve catalogued. Maybe, I thought, distinguishing between footnotes concerned with the novel’s fictionality and footnotes concerned with the “facts” of the real world could provide some sort of insight into what different novels were trying to accomplish, could expand upon claims made in prefatory material and paratext about the genre of the work.

However, I quickly came to realize that almost all footnotes are imbued with fictional and factual elements. Consider, for example, the indexical footnote. The indexical footnote can be thought of as extending the epistolary novel’s claim to reality in that it 1) continues to imagine a novel as a collection of things and 2) reinforces claims to editorship made in other paratextual material. A reader can imagine Samuel Richardson (we get his claim to editorship at the end of Vol. IV) pointing him or her to earlier letters without destroying the imagined reality of “Pamela” itself as a collected series of letters. These functions of indexical footnotes, then, reinforce the fictionality of “Pamela”’s claim to being an edited collection of letters.

However, although the book points to itself, it doesn’t always point to its content or imagined structure. While some footnotes direct readers to earlier letters, others point to page numbers in the various volumes, and almost all footnotes are accompanied by a volume number. These footnotes acknowledge not the fictional format of “Pamela” as a collection of letters but the actual, real-world materiality of the work. Because these footnotes “know” the format that “Pamela” assumes as a four-volume set, they cannot be thought of as an extension of fictional content or structure, but as a gesture to the existence of the novel in the real world. The footnotes imagine the work of literature as a work of literature that readers pick up and hold. In this way, it imagines itself as social.

As it turns out, what indexical footnotes tell us about how an author potentially imagined his or her work is much more valuable and interesting than the questions of fact or fiction, internal or external – not irrelevant questions, but not the only questions we should be asking. Claims to truth or fictionality are only one component of a work: what I’ve found is that many footnotes, like those that index a work, are social – many in a more overt manner.

Attributional footnotes are also explicitly social. Footnotes which simply provide an author of prose or verse do not necessarily seem to point to the material existence of other works, but do point to a person who has created the content cited: again, a “pointing” to the world external to the novel, or an imagining of the world inside the novel as including the real-life authors beyond it.

(A particularly unique case of this can be found in “David Simple,” in which lines of verse are attributed to Shakespeare, Milton, and others: however, the Shakespeare, which appears much more frequently than verse from other writers, also operates as a way to develop a character. Here, the lines of verse are almost secondary to the fact that this man is quoting Shakespeare – again – and the footnotes are a way to ensure all readers, whether or not they’ve ever read “Hamlet” or “Macbeth,” are aware of the reference. This, again, demonstrates the difficulty in cataloging: yes, the footnotes are citing other works, but not for the same purposes that other referential footnotes cite works).

Perhaps the most interesting types of footnotes to me are those that bring external works into the fictional realm of the novel, or else expand upon the fictional world of the novel. An example of the first can be found in “Adventures of a Hackney Coach”, in which a full song – chorus and all – is footnoted into the text. Here, the external is brought into the fictional – there is no longer an instruction the reader to “go find this work”, but a song that says “the characters sang this song.”

I’m not sure what to do with these footnotes. There are also examples – in epistolary novels especially – in which characters include whole manuscripts, plays, and, in one case, lift pages of a preface from another work of fiction.

It seems to me, at the most basic level, to be an example of what we talk about when we talk about the “social life” of novels. These are works that call up historical and modern literary traditions, current popular culture and societal figures, using all for material in their novels. And the nature of a footnote necessitates an awareness of readership, whether indexical or linguistic or referential, which also indicates an awareness of the materiality of the work. What’s so exciting is that we come across novels where footnotes occur every few pages: this offers a far more detailed “social map”, in my opinion, than any other type of paratext we document, while simultaneously providing insights into how an author imagines his readership and the knowledge they bring to their reading. 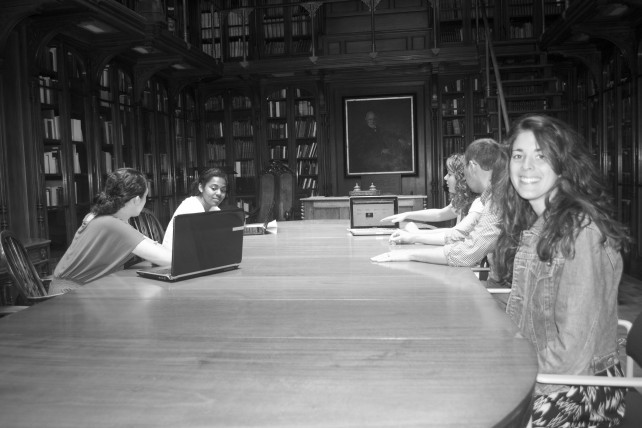 Alli Shultes is an Honors English literature major with an Honors minor in History at Swarthmore College. As an Student Researcher, she is especially interested in exploring footnotes in 18th century novels. Outside the classroom, she works as the Living and Arts editor at Swarthmore’s weekly print paper, The Phoenix, and as a Writing Associate for the college.