Indexing the Index: Part I

In that Empire, the Art of Cartography attained such Perfection that […] the Cartographers Guilds struck a Map of the Empire whose size was that of the Empire, and which coincided point for point with it. (Jorge Luis Borges, “On Exactitude in Science”)

Borges’ allegory of the perfect-yet-useless map frames the theoretical issues at stake in the Early Novels Database cataloging schema. Our extensive bibliographic records serve as maps to the physical, full-text novel. The process of mapping paratext requires that the cataloger make decisions on what is too much or too little information to capture. With each new piece of paratext, this process repeats each level of increasing detail and specificity leading to more and more complex notes fields and, eventually, a question Borges would have approved of: What happens when the index needs an index? For me, this dilemma surfaced while cataloguing footnotes and indices in two late 18th century novels and, in so doing, grappling with the genre of the index.

The novel Memoirs of the Year 2500 presents a classic perfect-map dilemma. The 1795 science fiction novel relies heavily on footnotes as it chronicles the state of politics and society in France during the second millennium. Following protocol, I catalogued every single footnote as I read – which meant recording the page number and photographing the footnote(s) for all but 50 or so pages of the 358-page novel. Why? The footnotes themselves were intriguing. Unlike notes in an epistolary novel, these paratextual additions behaved more like extensions of the text itself, often going on for several paragraphs and bleeding onto the next page (or pages). Certainly this data has use: we can now easily compare and classify the different types of footnotes in the novel, as Alli has done. But once you take into consideration the five hours of intensive documentation it required, such record seems far less useful. Like the chapter headings for each of Memoirs’ 44 chapters, this information might be better left out of the record.

Like Memoirs, Samuel Richardson’s The History of Sir Charles Grandison includes paratextual objects whose contents themselves index the novel. The novel’s 47 footnotes and two indices refer the reader to other sections in the text, delineating the novel into thematic sections much like the encyclopedic table of contents for Memoirs. As in Memoirs, the sheer quantity of paratext is daunting. Richardson’s footnotes–intended to aid the reader in quickly navigating a text –now pose a real-time burden on cataloger time and energies. Viewing the records of Grandison and Memoirs side-by-side, the most striking feature of either record is their abundance of paratextual indices. 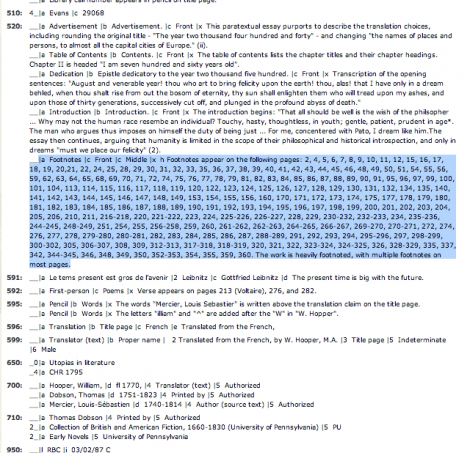 Excerpt from the record of “Memoirs of the Year 2500” 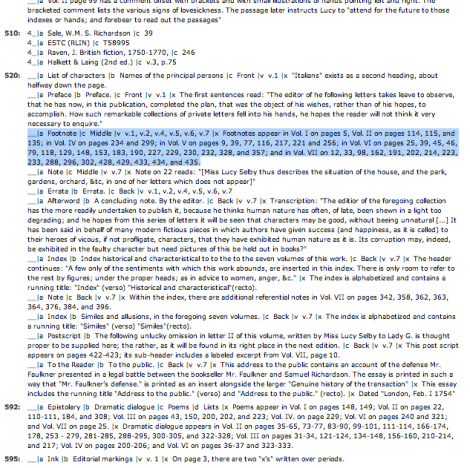 Excerpt from the record of “The History of Sir Charles Grandison”

Despite their similarities, the two books possess fundamentally different formats–one a short, two-volume novel, the other, a massive, seven-volume novel – and make use of footnoting practices in vastly different ways, a fact which becomes hidden beneath the mounting annotations in our records. The lengthier novel, as one might imagine, uses the reading directions of the footnote to simplify the massive amount of text. Richardson’s footnotes are pithy–no more than a sentence–and tend to systematically cross-reference letters in other volumes, keeping the reader oriented while amidst hundreds of pages of text. The footnotes of Memoirs, by contrast, elaborate what was a smaller main text, creating the appearance of a more complex narrative. A single footnote the latter novel might continue over two or three pages. As a device, the footnote indexes each novel in two distinct ways: in Memoirs it builds the text, while in Grandison, it organizes it. Yet, in order to differentiate between the two types of footnotes in the record, the cataloguer must transcribe or label these footnotes in a notes field. This problem becomes more acute when considering indices and tables of contents, whose contents include lists. More detailed clarification in cases such as this leads to exponentially more extensive–and thus, more difficult to navigate–records.

Beyond the practical problem of cluttered, unattractive records lies a theoretical one. Concern about information management in a large-scale databases has conventionally focused on level of the database as a whole. The process of cataloging “cataloging objects” –such as an index or series of footnotes– reframes this problem into a question of form directed at the level of individual record entries. If END’s data do, indeed, need further stratification, this, in turn, leads to more questions: Once we see an object as requiring an index, what status and autonomy are we bestowing on it? What level of reification does the index impose on the object being indexed?

These problems at the level of the database record – END’s “index” of a novel – are similar to the genre problems of 18th century novels themselves: issues of readability, completeness, referentiality vs representation, and audience; while still unresolved, they force us to reconsider the genre of the index, in both its 18th century and 21st century incarnations. The problem of bibliographic indexing will not be solved overnight. To begin, we might first rethink END as aspiring to be less like a verisimilitudinous Map, and instead, more like Borges’ other labyrinthine construction: The Library of Babel’s mythical index of indices. 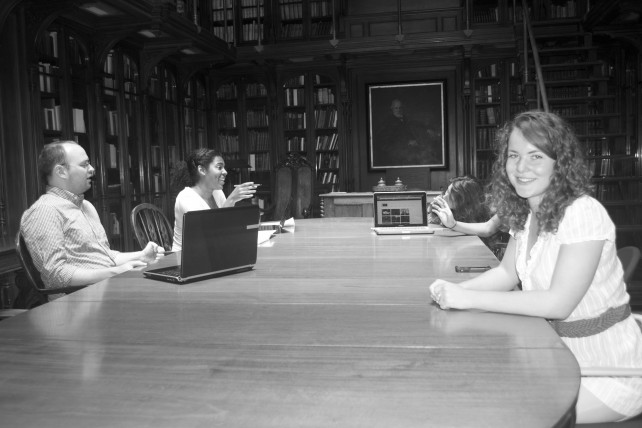 Sierra Eckert is a senior at Swarthmore College. She is an Honors English literature major and Honors interpretation theory minor, with a Mathematics course minor and a Creative Writing concentration. As a Tri-Co Digital Humanities Fellow, this summer she is working for the Early Novels Database research team to develop a website that makes bibliographic data on 18th century novels accessible, navigable, and engaging. When not working on END, you can find her editing Nacht literary magazine and researching for her thesis on literary databases, new media historiography, and Walter Benjamin’s The Arcades Project.
Web